This is the first wide release of the LOW-FI development build to backers and pre-order customers.

Things are still very bare bones at this point. Though many environments are present and base features like locomotion and comfort options are present, there is still much that is in an unfinished state. I want to give a short overview of controls and list some known issues as well as a few future plans here.

From the main menu, you can select your default control scheme for ground based locomotion under "comfort options". From here you can choose either Story Mode or Free Flight. Story mode will play a short "on rails" introduction flight to the Police headquarters, whereas Free Flight mode will start you taking off from the club district.

Ship controls use the Left Stick or Pad for Yaw and Heave, Right for Pitch and Roll.  Right index trigger is throttle, Left is reverse.

On the top right hand side of the cockpit is a monitor with controls for Lights, Siren, Boost, HUD and Docking(when over a landing pad). Please note that some landing pads (indicated by a small diamond) do not currently land the ship and load a new area. All pads with other icons load new locations.

There is also a "music play" button on the roof panel that currently plays a single song on loop. Cockpit UI is controlled by taping with your index finger on the desired control. Once you have landed at a new location, you are in ground based movement mode (that you selected from the main menu). Directly behind where you loaded in will either be an elevator access point to your cruiser, or the cruiser itself if you wish to leave.

Tapping your head (HMD) with your hand (controller) will bring up your AR (augmented reality) heads up display or AR HUD. This may have important information about the world around you. You can interact with the AR HUD by simply taping with your index fingertip on the desired option. There are small icons here for options and inventory screens which are currently works in progress, but do have a few useful functions. You can also move your AR HUD by grabbing it with the default grip button (depending on your controller) and moving it to the desired location.

If you reach with your left hand to your midsection and hold grip, you will grab your current utility item(flashlight), if you do the same with your right, you will pull out your current weapon(plasma pistol). Items are automatically holstered by releasing the grip button.

As mentioned, many systems are in a very early state. You can test some shooting mechanics at the far end of the police station where the live firing range is. Hit the big red button on the monitor to start the "range game". There are some grabbable and interactive items in the world, currently mostly confined to the "Capsule Apartments" beside the Police station. We're currently working on the loot and bartering systems.

Some options, such as dialog or entering and exiting certain doors do not require your AR HUD to be active and are displayed as a minimal version of the HUD. Simply touch options with your index finger to choose.

At this point it's mostly just an exploration experience. Feel free to wander around, get a feel for the world, and let us know on discord what you think. 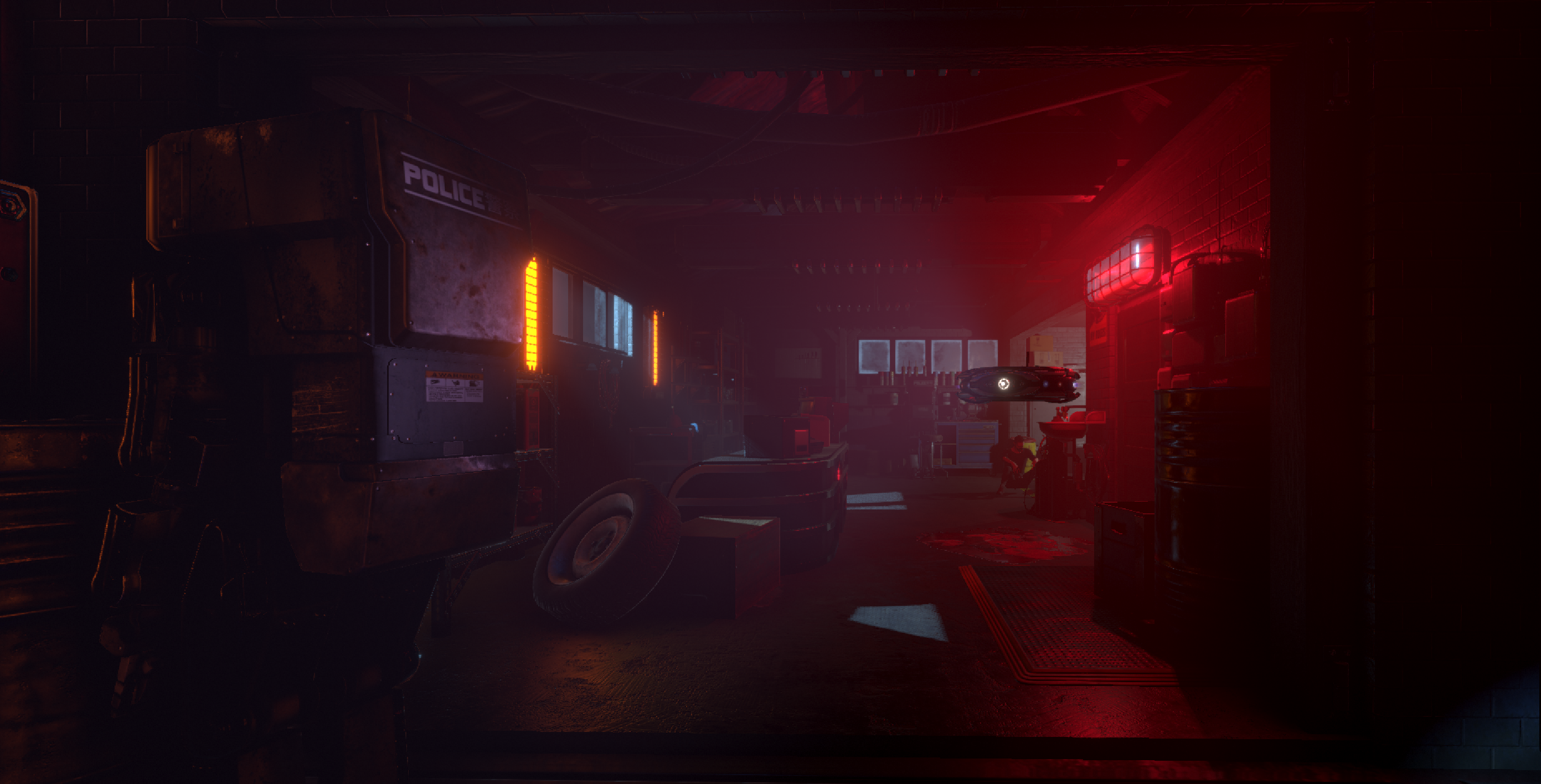 Here's a short list of what is currently being worked on and should become available within the next few updates.

Some more exciting things that are a bit further off (being worked on, but wont be in the next few updates) include:

what is the ultimate vision for this game.

inside the game universe. I know your a cop but to allow many users  all different jobs can be added in like a online multi free world interface

wouldn't it be great if through a door or portal like in our steam homes take up a flat or residence in your game world./  from steam environment walking into a corridor down in lift to the lower level of the world your team is creating

gambling aspect is there

if u build it they will come lol .

Who should I get in touch with for Discord access?

very good experience in the game. I could not get out of the red pill building so I had to go to the menu and start game again to get out. is there a seated mode for the game? with a crouch button.

Thanks :) Fixed in the next build (should be tomorrow night), including seated mode.

Hello Anticleric!
First of all congratulations on this interesting project. It looks really good! If I buy the game here, do I get access to the Discord and get a Steam Key later when it is released?

Hi :)
Yes to Steam for sure. I'll have to give you discord access separately.